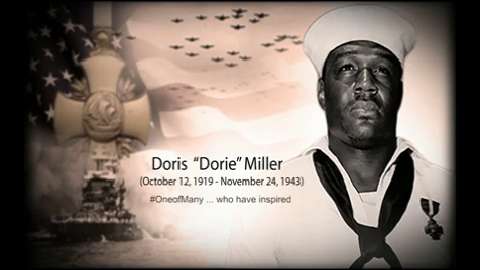 Miller was a Cook Third Class that the United States Navy noted for his bravery during the attack on Pearl Harbor on December 7, 1941. He was the first African American to be awarded the Navy Cross, the third highest honor awarded by the US Navy at the time, after the Medal of Honor and the Navy Distinguished Service Medal. Admiral Nimitz personally presented the award to Miller. The Navy Cross now precedes the Navy Distinguished Service Medal. Miller’s acts were heavily publicized in the press, making him an iconic emblem of the war for black Americans. Nearly two years after Pearl Harbor, he was killed in action when his ship Liscome Bay was sunk by a Japanese submarine during the Battle of Makin.

On January 19, 2020, the United States Navy announced that aircraft carrier CVN-81 would be named after him. The ship is scheduled to be laid down in 2023 and launched in 2028.