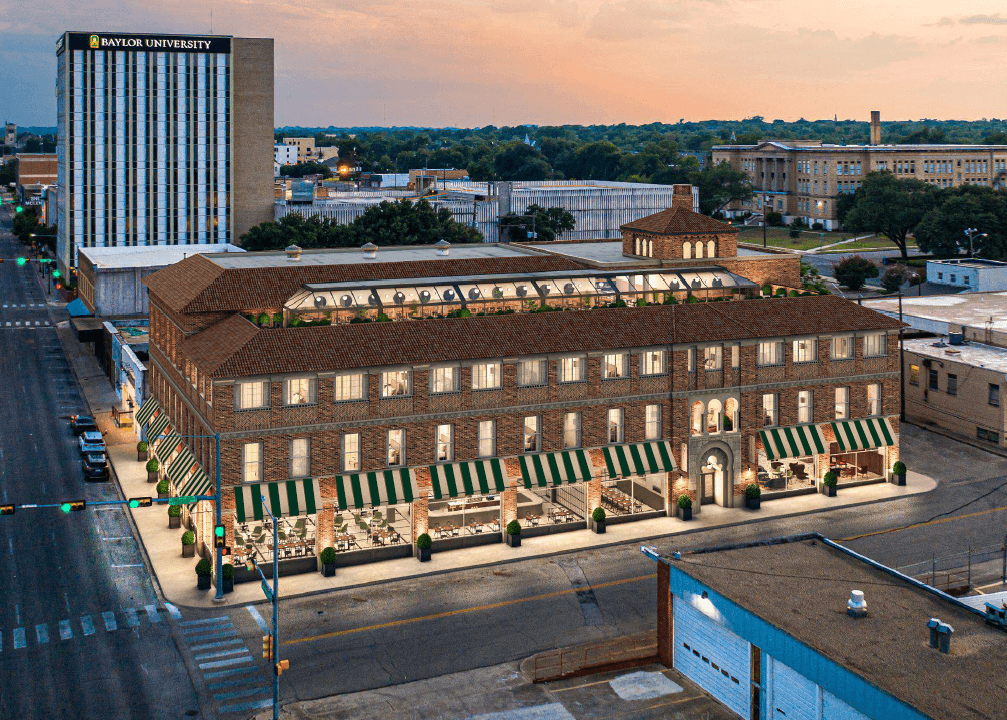 Featuring a Moorish-style arched entry and ballroom large enough for hundreds, the building’s architecture remains largely unchanged since it opened in 1928. Its entry foyer still has decorative symbols of Freemasons and Shriners, including scimitars, double eagles and the Masonic compass and square.

An October 2, 2019 press release from Magnolia gives an overview of plans for the property:

[WACO, TEXAS – Oct. 2, 2019] – Magnolia, the Waco, Texas-based home and lifestyle brand founded by Chip and Joanna Gaines today announced a partnership with Adventurous Journeys (AJ) Capital Partners that will bring a new hotel to downtown Waco. Located in the historic Grand Karem Shrine building at 701 Washington Avenue, the hotel is currently slated to open in 2021. An official name has not yet been announced.

“Home is a feeling, created by and for the people you love and share your life with; it’s a state of being known and loved just as you are,” said Chip and Joanna Gaines. “That is our dream for this hotel—that it would serve as an extension of the way we feel about our own home and all it represents to us, and that every guest who comes to stay would experience that same sense of belonging and community. We’re honored to work alongside Ben Weprin and his team at AJ Capital Partners to bring this place to life.”

Uniquely positioned in the heart of downtown Waco—just a few blocks from Magnolia Market at the Silos—the estimated 53,000-square-foot property built in 1928 will undergo an extensive historic restoration that will convert the former county office building into a three-story, handcrafted hotel featuring a rooftop terrace, a grand ballroom and ground floor restaurant and café.

“Reviving timeless, historical buildings is at the core of what we do,” said Ben Weprin, founder and CEO of AJ Capital Partners. “We are excited to partner with Chip, Joanna and the Magnolia team to bring an authentic hotel experience to the growing and lively community of Waco.”

Additional details about the project will be released in the coming months.