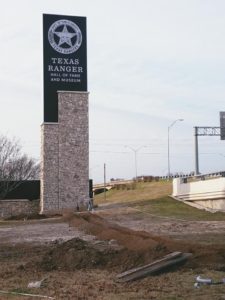 Byron Johnson, director of the Texas Ranger Hall of Fame & Museum, recently reported on an excellent upward growth trend in their attendance numbers. Looking at the years 2008 through today, 600,000 people ran the gauntlet of construction on I-35 and visited the museum during this period. And the numbers are on the upswing.

Despite the chaos from the road construction, national tourism site TripAdvisor conferred its coveted Award of Excellence based on outstanding visitor rankings. Chip and Joanna Gaines, whose home improvement program has dominated the State media, named the TRHFM as #1 on their list of things to do in Waco. See the post here: http://people.com/home/fixer-upper-chip-and-joanna-gaines-things-to-do-in-waco/

As 2017 begins, the Texas Ranger Hall of Fame & Museum has a wonderful new entrance monument that has become a distinctive landmark for the Waco area. The Waco City Council ensured there was adequate funding provided to build a striking testament to a Texas legend, one that will last for many years to come. Come visit!

Posted in Things to Do