Waco & the Heart of Texas have deep ties to Texas history. The Texas Rangers established an outpost near the area in 1837, but abandoned it after a few weeks when it was realized that they were too far in advance of the frontier settlements to offer much protection. The outpost was named Fort Fisher in honor of William S. Fisher, Secretary of War for the Republic of Texas. The Texas Ranger Museum is located on grounds called “Fort Fisher” in commemoration of this early outpost, and Company “F” of the Texas Rangers is posted here today.

In 1848, two years after Texas statehood, General Thomas J. Chambers sold his Mexican grant of land, which surrounded the old Waco Village site, to a group of businessmen from Galveston. In early 1849, surveyor George B. Erath laid out the first streets of Waco. Lots were sold for $5 each, with “farming lots” selling for $2 to $3 each. Among the first buyers was a Texas Ranger, Shapley P. Ross. Captain Ross opened a ferry across the river in 1849 and built the first house in Waco with help from Armstead Ross, who by all accounts, was the first African-American to arrive in Waco. The City of Waco was incorporated on August 29, 1856.

Despite its remoteness from the Civil War hostilities, McLennan County supplied 2,200 volunteers to the Confederacy, out of a county-wide population of about 8,000. Six of McLennan County’s volunteers became generals. Although Waco was in a severe and desperate condition at the war’s end, it recovered rapidly. Ranchers and cattlemen soon began driving cattle north. As the Chisholm Trail became more and more popular, cowboys and their herds crossed the Brazos River in Waco.

After the Civil War, Texans began to focus their attention on a future that had been dramatically altered by the devastation and economic upheaval. Settlers were moving west, businesses began to flourish and cattle drives became a common sight. Civic leaders decided a bridge across the Brazos was needed. It took 2.7 million bricks from Wacoan J.W. Mann and $135,000 to build the 475-foot span, which was finished in January of 1870. It was the first bridge built across the Brazos River. 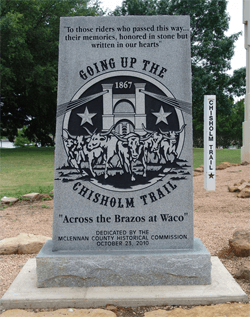 Upon completion, the Suspension Bridge brought the Texas section of the Chisholm Trail straight through Waco. A year later, the railroad was extended into Waco, and the city became a flourishing trade center. Following the bridge’s completion, a toll was charged for each person and each head of cattle. On September 1, 1889 the toll charge was eliminated.  The historic Suspension Bridge is the grand dame of present-day Waco and is flanked by the “Branding the Brazos” cattle drive statuary group and beautiful parks.

In 1886, Baylor University moved to Waco from Independence, Texas and merged with Waco University. Founded in 1845 under the Republic of Texas, Baylor is the oldest continually-operated university in Texas.

The Suspension Bridge showed its sturdy engineering when, during the devastating 1953 Waco tornado, it held fast. The tornado destroyed much of downtown Waco and killed 114 people. It is still ranked as the 11th deadliest tornados in U.S. history.

Today, a beautifully-landscaped riverwalk connects the Suspension bridge to Baylor University on one end, and Cameron Park on the other.

The Waco Tribune-Herald Museum is a 6,000 sq. ft. gallery located on the second floor of the Waco Tribune-Herald building at 900 Franklin Ave. The Trib museum includes a section on the Branch Davidian episode, among many exhibits on Waco history. It includes a decade-by-decade history of the city as told through artifacts and old newspapers, plus exhibits on special topics such as Heisman trophy winner Robert Griffin III. Open by appointment.

The Texas Collection at Baylor University is a treasure trove of photographs, books, and artifacts from the early days of the Texas Republic. Other libraries and exhibits relating to Texas history include the Red Men Museum, Masonic Grand Lodge, and Lee Lockwood Library & Museum.

Cowboy sculptures and a herd of bronze longhorns at the Waco Suspension Bridge are a part of the Waco Chisholm Trail Heritage sculpture project. The riders and 25 longhorn cattle pay homage to Waco’s role along the historic cattle-drive trail. The cowboys depict a diverse group, including a vaquero and an African American cowboy. The sculptures were funded by donations after Waco Cultural Arts Fest announced a million dollar challenge grant from Waco philanthropists Clifton and Betsy Robinson. The sculpture grouping has become a key place for visitors to take photos. 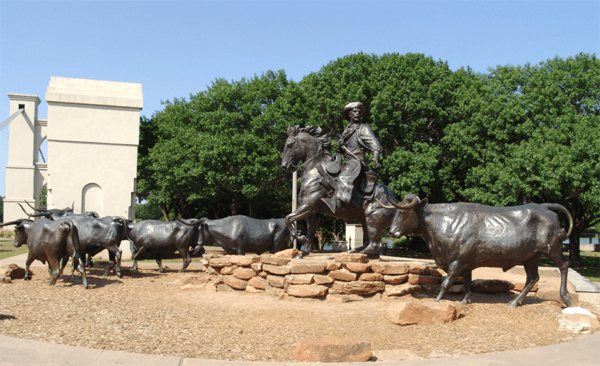