On July 10, 2015,  U.S. Secretary of the Interior Sally Jewell announced that the mammoth site in Waco is now officially the Waco Mammoth National Monument and part of the National Park System. President Obama designated the site as a National Monument using the American Antiquities Act of 1906. 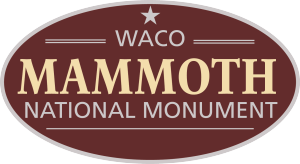 The Waco Mammoth Site was discovered in 1978. Since that time, 23 Columbian mammoths have been uncovered. The site was opened to the public in 2009 thanks to a partnership between the City of Waco, Baylor University, and the Waco Mammoth Foundation. More than 21,000 people visit the site annually, traveling from all 50 US states and more than 50 countries. The site features a state-of-the-art, climate-controlled dig shelter permanently protecting the in situ remains of the largest find of a nursery herd of Columbian mammoths, making it one of the most significant Ice Age fossil beds in the world. As part of the National Parks System, the Waco Mammoth National Monument is expected to draw even more visitors to the Heart of Texas.

New pricing will be in place beginning Saturday, July 11th.

Please note: National Park passes do not apply to guided tour fees.
Please support our preservation mission as access to the in situ fossil bed is by guided tour only while this new unit of the NPS is developed.

Click here to view the news release from the US Department of the Interior and here for the Waco Mammoth National Monument bulletin.