The secret is out – and we are pleased as punch. Texas Highways‘ readers ranked Waco as the 3rd best travel destination in Texas – out of over 1,200 possible destinations. 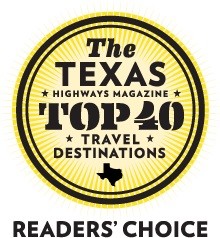 Last fall, in celebration of  Texas Highways Magazine’s 40th-anniversary year, the magazine asked readers near and far to  share their favorite places in the state for the Texas Top-40 Travel Destinations. Share they did, by phone, email, Facebook, and through letters. Thousands of readers helped to shape the final list, which has been divulged in monthly installments throughout 2014. On October 8, 2014, Texas Highways announced the top three destination, and Waco & the Heart of Texas was included in that elite group.